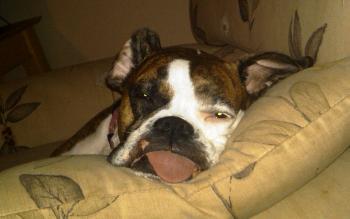 I am writing to let you know how things turned out with Ashlee, who we renamed Allie. I was a foster for LSBR and had successfully fostered two other dogs, Brassy and Trinity and got a call that another one needed my help. When I got to the vets office to pick up Ashlee, she was very sick. She didn’t barely want to lift her head and she was scared. I put her in the car and we started the long trek back to Katy. She fell asleep in the car and by the time we got home, you could tell she just didn’t feel well. I introduced her to her new foster brothers, Ben and Gringo and she did NOT want anything to do with either of them. I had to keep her separated from them for the first few hours, but once she realized no one was going to hurt her, she calmed down. We ended up having to take her back to the vet 3 times due to her illness. She was running a very high fever and just didn’t feel well. After about a week, she started feeling better and I got to see this personality that reminded me of a toddler. She was so curious and interested in everything, but not in a bad puppy way, just in a cute way. She knew basic commands, sit, stay, drop it, leave it. She had impeccable manners, she wouldn’t get on the couch or the bed. After nursing her through her illness, I knew I couldn’t let her go. Allie became my first foster failure, which sounds bad, but is really a wonderful thing. I had to adopt her and keep her for myself. Since then, in the past 2 years, she has been a loving and wonderful part of our family. She is so playful and just wants to run and play with whichever brother is up for it at the time. She is also a huge cuddle bug and now sits next to me on the couch or lays next to us in bed. We couldn’t have asked for a better companion than Allie. Thanks to LSBR for bringing her into the program, so that should could be a part of our family. Leanne Jones

Hello! It's been a little over a year since we adopted Zoe (then Aja). She has been everything we could have wished for and more. I think Zoe knew she was at her forever home as soon as she walked in the door, because she made herself right at home. She is such a happy girl! She LOVES people, and can't contain her boxer wiggle when anyone comes over. She brings a smile to everyone she comes in contact with. She has made several friends, human and canine. She loves going to the dog park and heading straight for the mud puddles! She loves going for car rides and road trips and sticking her head out of the window and sleeping in the back. At home she enjoys sitting on the patio, wrestling, and taking it easy in her donut bed. We recently had a daughter, almost 5 months ago, and Zoe has been wonderful with the baby. Although Zoe is very curious, (as any boxer would be), she is VERY gentle and patient with our daughter. I think they will be the best of friends as our daughter get's older. Thanks for all your help in finding us a great addition to our family!

(4/5/08) Congratulations to The Faery Family and JAXON (fka Ajax) too! Can you believe this little deaf boy found his way to a family where everyone can speak American Sign Language? What a great match!!

We adopted Apollo (fawn) almost two years ago. He has become an integral part of our family and neighborhood. He loves tormenting his big sis, Roxy (brindle) and chasing after his mom's feet. He has quickly become the most popular dog in the neighborhood and the kids come by on a regular basis asking if he can come out and play. Many of our family and friends have changed their opinions about large inside dogs because of his great attitude and ability to get along with and love everyone. We affectionately have nicknamed him our "Cuddle Bug." He has no problem putting all 60 pounds of him in your lap and resting his head on your shoulder while you are sleeping or watching TV. Life would not be the same without this guy around! Thanks for saving him, our family is complete with him in it. -- Laura Ruebush --

I wanted to let everyone at LBSR know that Jack (Andy) is doing great. Jon and I adopted him in December and he is an absolute joy. Every day I spend with him I cannot help but feel extremely lucky that we were the ones to take him home. He is an absolute charmer and all of our family and friends love him. We recently moved into town and two of our next door neighbors volunteer themselves to babysit him any time we need a helping hand. We haven't taken them up on it but it just what happens when people meet Jack. I am so glad that Jon decided that he wanted his first dog to be a boxer. Jon and I love Jack! We love that his ears flop on his head and we love how his tongue sticks out of his mouth because it just doesn't quite fit. I love that he has become good friends with one of my cats and is nice to the other cat even though she doesn't quite like him. He was very interested in them at first but quickly became friends with Una and seems to have developed an understanding with Sadie. She just doesn't understand that he wants to play. He loves to go for runs and walks but he is just as happy to run around our living room with his favorite hedgehog squeak toy or his green kong (he loves them equally). He loves to sleep on the couch and curls up next Jon or I before setting off to the other end of the couch where he can have his own pillow, if he can lay on three pillows even better in his book. You will see in one of the pictures that I sent that he is laying on my faux fur blanket. I call this his "it's a hard life" picture, but he deserves all the pampering and love possible! Jack is learning to become my running buddy. He was already fantastic on walks but seemed to think it was okay to take off full tilt if we started running. We have gotten the jog command down and I am still working on the fast command for those moments that I want to run fast. We go for 1-3 mile runs depending on the heat and he loves it. I have to be careful not to let him go full tilt and we stop for water at the doggie stations so that he doesn't overheat. One of my good friends that now lives in Denton recently came to visit Jon and I. She and her husband were so impressed with Jack's personality and his good manners that when they returned to Denton they decided a to adopt a boxer mix 4 month old puppy. They had already decided that they would be getting a friend for their rottweiler and once they met Jack it had to be a boxer! One of the reasons that we were all impressed was how well he behaved with their six month old daughter who absolutely fell in love with him. They had her playing on the floor and Jack was always careful to step around her, of course there was always one of us on the floor near the baby just in case. I had read that boxers are good with children and I am very happy to say that our Jack fits the breed standard in that respect. I am sending you a bunch of pictures for you and the rest of the wonderful LBSR volunteers. Thank you for all that you do! Thank you for taking care of our Jack until we were able to bring him home. -- Love your friends, Robin and Jon --
Next Page »
Click a letter to find an animal or view all.
A | B | C | D | E | F | G | H | I | J | K | L | M | N | O | P | Q | R | S | T | U | V | W | X | Y | Z